One of the endearing qualities of the leadership of the island province of Batanes and its people is the ability to balance tourism arrival over preservation, not only of the province’s natural beauty but also the local culture.

While almost all other tourism destinations here and worldwide run a rat race to get their piece of the tourism pie, Batanes contents itself to having smaller groups of tourists who value rich culture and who give respect to the natural beauty of its protected landscapes and seascapes.

This is one of the many reasons why the UNWTO-INSTO and the UP Diliman made Batanes the first observatory site for Sustainable Tourism in the country. Some studies and survey activities were conducted recently to help the province preserve its natural wonder. The results of the activities are now being processed ready to be used for planning purposes including the crafting of the Batanes eco-tourism framework plan and a product manual.

To complement the efforts at protection and preservation, the provincial government passed an ordinance regulating the activities of its more than 200 trained tour guides. Even the spiels of tour guides have to be checked that these are accurate and updated as embodied in the Tour Guide Handbook crafted by the Batanes Tour Guides Regulatory Board. Before their licenses as such are approved and released, they have to undergo written and oral examinations. 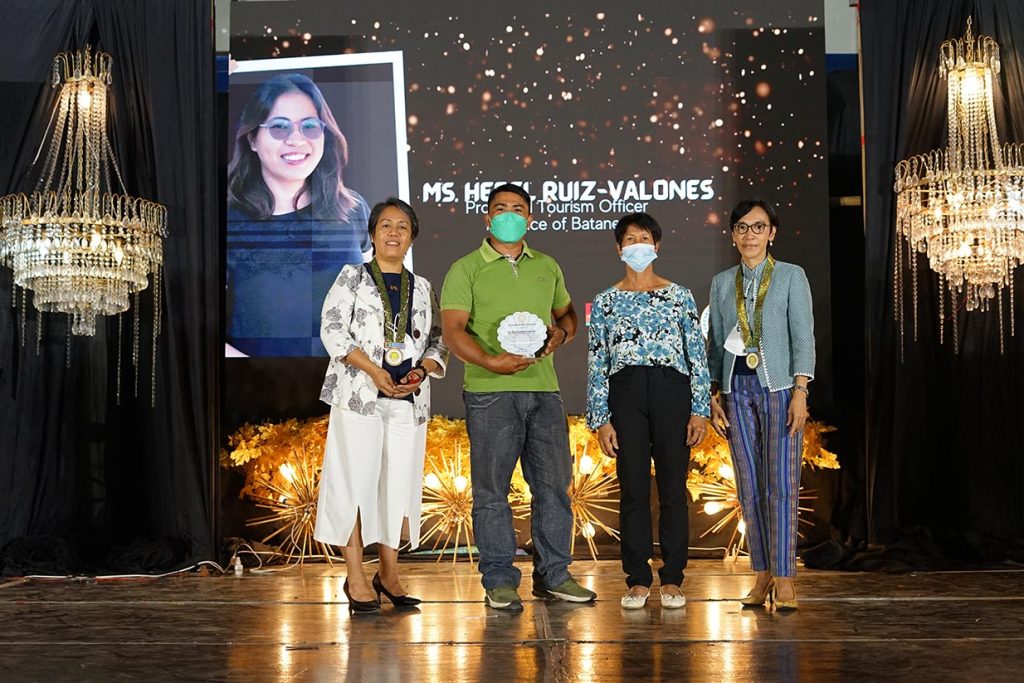 Way before the outbreak of the health pandemic, the province welcomed its first tourists onboard a Cruise Ship in 2017, followed by two more in the following years.

The province now hosts three major annual events: The Payuhuan Festival whose celebration coincides with that of the province’s founding anniversary in June where activities on local performing arts, traditional craft making, culinary, those of local paint artists and the awarding of outstanding Ivatans are highlighted;

The Ivatan Festival which is celebrated in the month of October, jointly with the Tourism Week and the IP Month. Featured here are activities like Ivatan Trivia Quiz, traditional games, the Search for Mr. and Miss Ivatan and the awarding of the Maniped nu Ivatan. The Heritage Month celebration which started in 2020 through virtual contests in film making, photo essay and virtual tour guiding is also being observed. Series of other webinars conducted were on the Ivatan architecture, Ivatan attires and Ivatan handicrafts.

Hegel Ruiz-Valones, provincial tourism officer, said a special committee was organized to study further the Ivatan attires as a whole package of industry of loom weaving and beadworks, once created, will bring about job generation, and thus, additional income for the local industry workers. “We anticipate the revival of the lost craftsmanship of the Ivatans,” she said.

The entire period of the health pandemic was, afterall, used to create cloth patterns and accessory designs, and some restoration and preservation works were done, she added.

Workshops in each of the province’s towns, namely: Basco, Ivana, Mahatao and Uyugan, in the island of Batan; and the island towns of Sabtang and Itbayat, were conducted to encourage more artisans to create souvenir items. The Ivatan attire, together with the accessory design, will be featured this month of June in celebration of the Payuhuan festival.

Historical structures including church ruins, Ivatan mansions, Spanish bridges and Gabaldon buildings were restored and are now being preserved.

It is worthy to note that all these are the outputs of the hired displaced tourism workers, with the guidance of the Ivatan graduates of the Escuela Taller and the Ivatan architect-conservators, Valones said.

The Provincial Council for Culture and the Arts also helped inventory the books and manuscripts of the late Dr. Hornedo, a local historian, and which were later transferred to the National Library, Basco Branch. A special room was developed for these heirloom pieces and which will be maintained by the provincial government for the students and researchers to learn from.

Two coffee table books featuring local plants and fishes were produced during the pandemic. The contents of these were collected and verified from each municipality. These books now serve as comprehensive reference materials for mountain and trekking guides.

The provincial tourism officer said through the provincial ordinance creating the Cultural Performing Arts Group, the provincial government started a partnership with schools and the municipal local government units for the organization of performances worthy to be shown to visitors. “We have taken the first step towards the procurement of attires and instruments to be used by the performers, and we are encouraging more local performers to join the group,” Valones said.

The provincial government now, more than ever, enlists the support of the Department of Tourism and the Tourism Promotions Board for the documentation and promotion of the Ivatan culture and attractions.

“We see to it that we join the regular Philippine Travel Mart and other tourism events as means to showcase our province,” she said.

Maiden flights to and from the province were already staged by at least three airline companies, namely: The Philippine Airline, the Cebu Pacific and the Air Swift, to provide accessibility to the beautiful island-province in the North before the pandemic.

The provincial government likewise continues to work with television networks for the exposures of the island-province’s unique attractions and culture free of charge.# PR/RTFAN/#9