The Department of Tourism, Region 2 (DOT-Region 2) welcomes the new year with a new Regional Director in the person of Mr. Troy Alexander Gozum Miano of Cabatuan, Isabela.

Director Miano is a product of the Ateneo de Manila University, La Salle Greenhills, University of Santo Tomas, University of the Philippines Diliman, Isabela Colleges, University of Makati and the Lyceum Northwestern University with a degree – Masters in Development Management and Governance and Doctor in Public Administration. He is also a Licensed Professional Teacher. 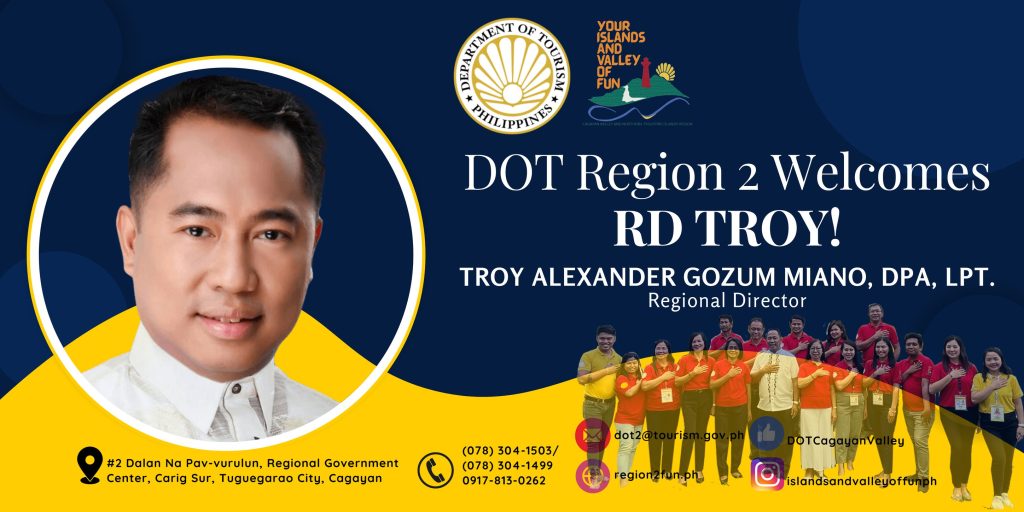 Prior to his role as the new Regional Director of DOT-Region 2, Director Miano had served as the head of the Provincial Planning and Development Office before becoming the Provincial Tourism Officer of the Province of Isabela and Head of the Provincial Museum and Library.
The Director has committed to establish close coordination with the local government units in the region in order to encourage them to prioritize and fund tourism-related projects.#
𝐒𝐨𝐮𝐫𝐜𝐞: 𝐃𝐞𝐩𝐚𝐫𝐭𝐦𝐞𝐧𝐭 𝐨𝐟 𝐓𝐨𝐮𝐫𝐢𝐬𝐦, 𝐑𝐞𝐠𝐢𝐨𝐧 𝟐
January 3, 2023